Or putting the fun back into JavaScript

This is a short primer to introduce you to YUI.Test. As you might have noticed, hacking in JavaScript, né LiveScript, ceased to be fun when Internet Explore implemented JScript, a freak cross bread of the JavaScript syntax and VBScript. Other browser makers entered into the cross-breading competition and I left for a job that let me put all the logic in the server.

I spent two days creating the milestone_table script that allows users to create milestones and add them to the table. This involved a refactoring of the milestoneoverlay script and adding what appeared to be a few lines to call the existing view that renders a milestone table row.

Day one was horrible, there was a lot of shouting, words were said that may have hurt my computer's feelings. There were two problems. The first was that my extraction of the milestoneoverlay script had failed. This was not true as I learned. The Windmill test broke weeks before I started my branch because the page layout changed [1]. The second problem was the complexity of corner-cases led to unpredictable behaviors.

Day two was a fun roller coaster ride refactoring my script from first principles using unit tests. YUI.Test made me write a library, structure my code to have simple contracts to do simple things, and let me refactor safely. After a few hours, I was able to bring predictable behaviour to the script and I believe the code was much easier to read.

You can see the milestone_table script library and its tests at lib/lp/registry/javascript.

You can read the summary and API of YUI.Test at

It is not as solid as other xUnit frameworks.

It is better than anything else we have used. It is fast to develop, easy to maintain, and allows good designs to emerge. Since the test harness is a page, you can develop a library/widget in many small branches before you decide it is ready to include in the zpt.

The Harness and Runner

JS testing involves two parts. One is an html file that will bootstrap the environement and load the required code needed to test. There are sample templates to help bootstrap your tests in the application root.

The first step is to setup the html file. You'll need to adjust the paths of the various script files included. All code not under direct test should be pulled from the build/js directory. Replace ${LIBRARY} with the name of your module you're testing.

For instance if you're working on adding tests to app.widget you'd:

The test runner picks up the modules that need to be run based on the <li> items in <ul id="suites">. If you did the replace above you'll find that the test module is setup for you.

The second step is to prep the JS file that runs the tests themselves. The demo files is setup for the same find and replace of ${LIBRARY}. It will complete the name of the module for you. It's setup to add a .test to the end of the module you're testing.

The default template has an initial test that will check that it can load the module you're looking to test. After that find and replace, you should be able to open the html file and get a single passing test. If you get any errors, correct them now before moving on to add more tests. Potential errors include missing dependency modules, typos in the names of the module, or the paths to the build directory being off.

To run the tests interactively simply load the html file into your browser. A successful run, with fetchCSS:true, looks like: 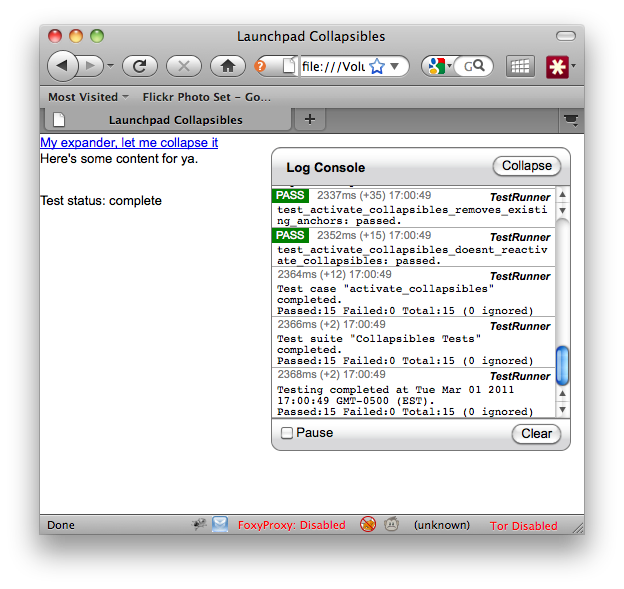 The YUI unit tests can be run from the command line.

Unfortunately you may not run a single test.

Use the get/set wrappers to access innerHTML to reset the HTML DOM for a test. clone was not reliable as I thought it would be.

The Y.Node.create() methods expects a single root node in the raw markup. I had to strip whitespace to ensure the node was created in my library, so I tested that in the library tests.

Tests will often have a requirement that you want to see that the DOM is correctly updated as a result of a user initiated action such as a button click. Sometimes, in production, such a user action may result in an XHR call where the response data is used to update the DOM. In such cases, you still want to be able to test the interaction within a YUI test without having to resort to using an integration test. To make this easy we have MockIo class in Launchpad.