We are trying Kanban to coordinate our development process. The goals of switching to Kanban for Launchpad development are:

The two most important characteristics of a Kanban system are:

Each Launchpad team has a http://leankitkanban.com board set-up for them. This will be the control center of the development activities.

Background information on Kanban can be found on the Canonical Lean CoP resources page.

This station is used to track and limit the number of work at the pre-coding stage. The end goal of that station is to get the feature to a ready-to-code stage. It has two subprocesses:

The WIP limit on this station has been initially set as the number of Feature lane available to the team.

That's the station where the coding and development activities occur. It is subdivided into a number of sublanes.

In this station, the development work is validated on production data. The first Landed lanes is used for cards that were merged into devel or db-devel and are awaiting validation against our test suite buy buildbot. Once their integration is blessed and they are available for testing on staging or qastaging, the card should be moved to the Ready lane.

Its WIP limit is around twice the number of developers.

The Ready lane is used to hold items that have pass QA and that are ready to deploy. Once the item has been deployed, either through a nodowntime deployment or the monthly roll-out, they can be moved to the Done-done lane.

Most of the lanes are further subdivided in a WIP and a Ready column. The WIP column holds the card when the developer is working on the task. Once the work related to column is complete, it's moved to the Ready column. So that it can be pulled in the next one when things start. The Ready columns are used as hands-off buffer when the item will switch owners across functional boundaries (for example, if the engineer doing the UI mock-ups isn't the one who will implement the feature). It's also used to compute the effectiveness of our process (that's the ratio between when things are actually being worked on vs the time things spend waiting for some-one to be available to work on them). 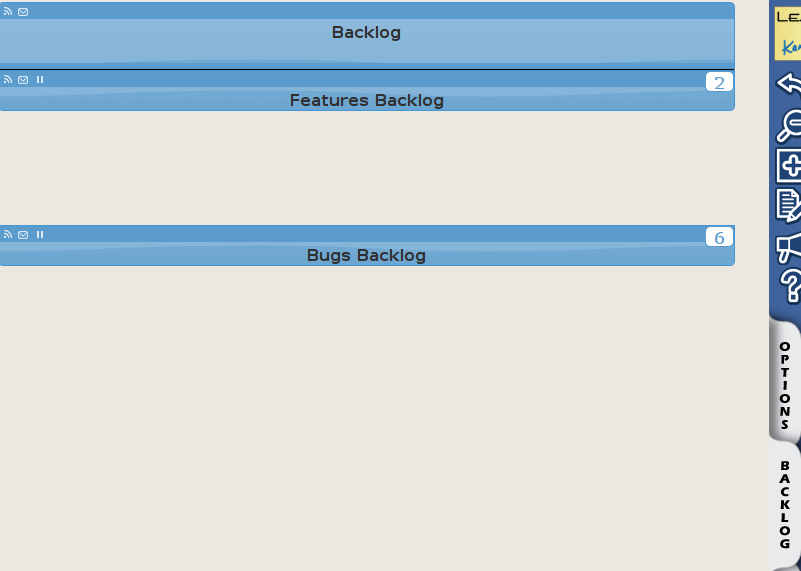 The backlog is structured into different areas and also has limits on it. Usually there is a lane to hold upcoming feature work and another for defects, tech-debt and general enhancements. New work should be pulled from these when capacity is available.

It is the responsibility of the team leads in conjunction with the product strategist to fill the backlog.

The lane in this pane holds the completed items. There is a special lane called Trash or Rubbish that is used to collect items which were started but then got cancelled.

There are three main type of work items.

The yellow cards are used when one of the items in the Feature lanes need to be subdivided.

We use only two priority icons for cards.

All other items should have the Normal priority.

The overall aim of the game is for developers to move things as fast as possible to the right-hand side of the board, without violating the WIP limits.

When selecting the next task to work on, the prioritisation criteria:

When no progress can be made on an item that is in a WIP column (not sitting in a Ready column where it means that work could start on it), the card should be marked as blocked and the reason for it should be entered.

What if the WIP are reached?

When a WIP is reached and moving one of your card or starting new would exceed one of the WIP limit, what should you do?

The thing to not do is ignore the WIP limit! Obvious thing to do are to look at what items are blocked downstream. Is there someone's else branch that needs a review? Are there branches that needs QA that you could help.

If there is nothing you can do to help remove the blockage, then do some non-code related:

If this situation happens too often, it means that there is a systemic reason for it. You should discuss it with your team lead and team mates, maybe even the whole Launchpad team. It's possible that the WIP limits are too low, then they should be raised, but that shouldn't be the first obvious response. Flow problems points at systemic problems in our process and opportunities for improvements.

It is suggested that teams use the Kanban board to drive their stand-up. Instead of taking turns and each person reporting what they have done, what they are up to and their blockers, it's easier and faster to walk the board. Looking at all the in-progress items and discussing their status. With experience, you can focus the discussion only on blocked items and slow-progressing items.

Obviously, teams should make sure that the boards are up to date before starting the stand-up.

At the start of this experiment, there is no Launchpad integration. Which means that the status of bugs will have to be maintained in two places. It is more important that the kanban boards are up to date, than the Launchpad counterparts. So if people find it a bother to update two things, only update the kanban for now. The fact that the stand-up is driven from the kanban should make it obvious the rationale for this.

Following the initial experiment, we are now looking at synchronising Launchpad and Kanban status using their somewhat RESTful API. They recently added the ability to link each card on the Kanban board to an external link which makes it easier to link both ways.

The https://edge.launchpad.net/lp-kanban project will host the integration effort.

The evaluation of the initial experiment was very positive.

Success criteria for the experiment were: